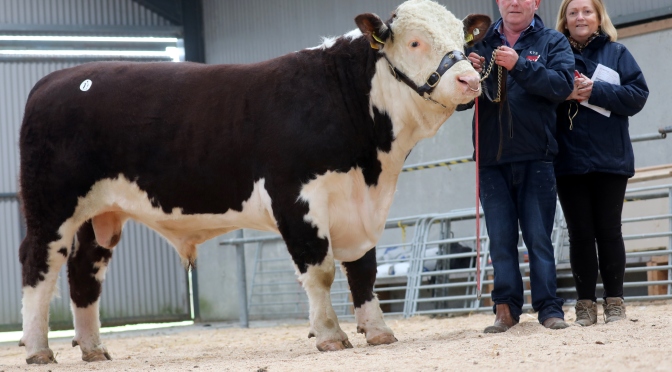 The Irish Hereford Premier Spring Sale was held last Saturday 27th March in GVM Tullamore at 1pm. A sale very different from what breeders are used to whereby there was no washing or parading of bulls permitted and sellers had to leave the premises once they had unloaded their bull into the pens. Viewers were then allowed on site by appointment only at an allocated time slot before the sale commenced.

Despite the restrictions which caused worry among breeders, there was a 65% clearance rate – up on previous sales and an average price of €2970 which lent to a flyer of a sale & a great start to what hopes to be a consistently good bull selling season. There were 10 out of the 17 bulls sold for at least €3000 with eight of them earning above the mark. Irish Hereford Prime kindly sponsored €250 to the buyers of each bull sold for €3000 and over. This was an invaluable support to breeders and proved just how helpful and worthy a contribution it is.

The top of the town was earned by Kye Nando 881 who sold for €4200. This four star Terminal bull was bred by Free Town Nevada and out of a Steil Gerard Dam. This fertility tested bull was sold to a fellow breeding herd in Cork.

Next in line at the top of the sales prices was Airhill Raffael, exhibited by Nigel Heatrick of Glaslough Herefords. Nigel purchased this bull as a calf on a cow at the Airhill Reduction sale in 2019. This calf proved his value on Saturday when he sold for €4000 to a breeding herd in Offaly. Raffael, sired by Cill Cormaic Napoleon, has served cows in Glaslough herd already & his first calf was born just a few days before the sale, & Nigel is delighted to have his progeny on farm coming on again.

There was great success for Longford breeder’s duo; Edwin & Robert Jones of Keenagh Herefords. The pair showed Keenagh Pedro who came into the ring as Lot 10. Sired by Keenagh L-Jay, a home bred sire out of Hollow Point Broker, is definitely proving his worth this season. Pedro is also sired by a Kilsunny Goliath dam. This five star Terminal & Replacement bull was sold to a Co. Clare herd for the excellent price of €3900.

Success didn’t end there for the Keenagh herd when they sold their second entered bull; Keenagh Prince Pablo for €3600. Again sired by Keenagh L-Jay, this fine bull was sold to the pedigree breeding Hereford herd of Wade McCrabbe in Donegal.

Lot 26 came to the fore when Ballinalick Felix, a Five Star Terminal bull sold to Carlow for €3200.

There were a number of other bulls sold for €3100, including Lot 24 – Fortviewpoll 1 Party. This Five Star Terminal & Five Star Replacement index bull combined the best of traditional & modern genetics. After being out wintered, fertility tested & confirmed myostatin free, this Fortview bull was sold to the west of Ireland.

Lot 25 – Woodviewpoll 1 Oskar was also sold to the West of Ireland for a smashing €3100. This Five Star Terminal & Five Star Replacement bull was sired by Allowdale Rory 594 & bred from a Solpoll cow.

It was a good sale for Grianan Herefords who sold Lot 23 – Grianan Ultra for €3000. Sired by Grianan Parker, who has produced National Champions & bulls that have previously sold for €5000 & bred from a Churchill Storm bred cow, who is a full sister to Grianan Firecracker, this quality bull has a birth weight of 38kgs as well as a 200 day weight of 324kgs.

Kicking off the good trade on Saturday was Boyanna Storm 1st. Sired by Cavehill Storm, this Five Star Terminal & Four Star replacement index bull, was fertility tested and had cows scanned in calf before being sold to Wexford herd for €3000.

Congratulations to all exhibitors &the best of luck to all purchasers with their bulls. Many thanks is extended to all who sold & purchased at the sale, to all who worked & volunteered their time to ensure a smooth running of the sale, to GVM Tullamore for hosting the sale & the staff, to our newly appointed auctioneer Richard Ryan & to Irish Hereford Prime for sponsoring this sale & contributing the fantastic sum of €2500 to over half of the buyers.

Catalogues will be available two to three weeks prior to each sale & photos of bulls can be viewed at Showstock.ie.

Sale rules & guidelines for both Nenagh & Kilmallock sales in April are the same as Tullamore & outlines HERE!

One thought on “Hereford Bull Sales off to a flying start!”