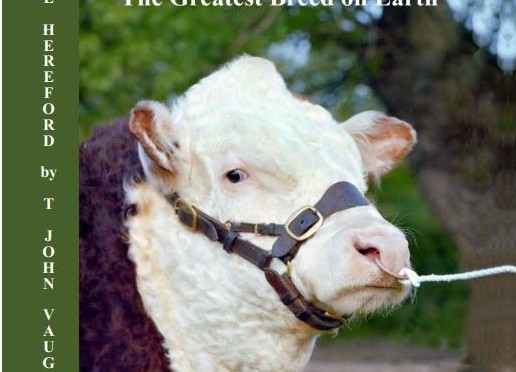 Former Hereford breeder from Hereford in the UK; T. John Vaughan, has just finished writing a 416 page X A4 book entitled; ‘The Hereford, The Greatest Breed on Earth’ .

It is nearly 60 years since John judged at the RDS in Ballsbridge and he also judged in Carrick-on-Shannon along with hosting and entertaining Irish Hereford breeders on several occasions over the years.

John also sold his home bred stock to Irish breeders on occasion including; David Carroll of UDEL Herefords who bought ‘Vorn 1 Just The Job’ – who was twice Royal Dublin Male Champion and 15% of UK Herefords still carry his blood.

John previously wrote ‘Bovine Showbiz’ which sold 5,000 copies and now there are just six left on the shelf. John said he “wrote it in 10 days and it was printed in another two weeks. I thought it was a doddle producing a book. But ‘The Hereford’ has been ten years in the making and virtually every day in the past twelve months.”

The manuscript is scheduled to be printed and ready for dispatch the first week of December. The retail price is €60 + PP.

This is very exciting as the book details where the breed began right through all of the developments, ups and downs that have happened to and within the breed right back as far as the early 1800’s and right upto today! It is the perfect learning point for breeders and all Hereford breeders will agree it is aptly titled.

Anyone who is interested in purchasing a copy can do so by emailing their interest to irishhereford@gmail.com and the Society will look after all orders from there.