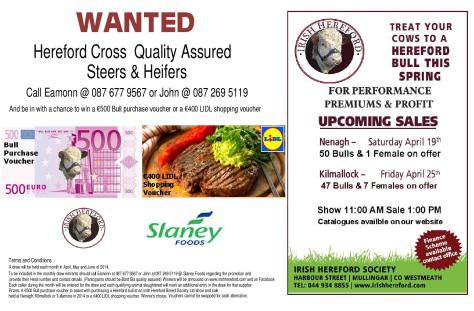 Three young daughters of Aussie sire Mawarra Sentimental stole the limelight in the Hereford division at Carrick on Shannon.

These nubile young ladies were just fourteen months old the Champion SteilSaoirse 240 born February 2013 to SteilSaoirse 172 a Glaslough Esquire daughter and sold at €3,100. Her half-sister and second to her in her class SteilPondra 234 again born in February 2013 out of a Trillick Best daughter Steil Ellen sold at €2750. The third sibling Steil Cathy 243 born in March 2013 sold at €2550. Her dam is SteilPondra an Ervie Classic daughter.

The McCormack’s netted a cool €2,800 average for their offering on the day. The sire Mawarra Sentimental whose semen was imported by the Society as part of its Breed Improvement program is quietly building a name for himself as a reliable bull delivering quality, length and style. Semen can be obtained by calling the Society at 044/9348855.

Can you ignore the potential of €2,029/ha gross margin on your farm?

The quality of the calves on offer was very good and prices for Herefords were well ahead of other breeds on offer.

The prizewinning Bull calf was presented to Mr. Paddy Fitton of Waterfall, Co.Cork and sold for €395.

The prizewinning Heifer Calf was bred by Mr. William Collins, Reavouler, Drinagh and sold for€325.

There was a fantastic turn out for the Bandon Bull Sale this week as crowds arrived in large numbers to see what was on offer at Cork Marts, Bandon. The Hereford section consisted of 23 entries which made judging difficult due to the standard of all involved.

Mr Ted O’Sullivan, Bartlemy, Co Cork who produced the Champion at last year’s event this year pulled off a double gaining the day’s top price and the Championship. His Bull ‘Furaleigh Ranger 843’ a well grown son of Rathcor Ranger out of Furaleigh Lady 668 went for the top price of the day at €3,550 and sold to Mr. Finbar Crowley, Roovesbeg, Coachford, Co. Cork. His second bull ‘Furaleigh Prince 857’ a son of Sire ‘Carhuefree Prince’ and Dam ‘Furaleigh Lady 663’ was awarded the Championship and later sold for at €2,700 to well- known Hereford breeder Mr. Tom Hickey, Skehanore, Ballydehob, Co.Cork.

Mr Hickey himself had three strong useful bulls on offer and sold all three. Skehanore Taylor by Moyclare Courallie and Skehanore Tempest by Balleen Plomber both at  €2,700 while Skehanore Titus found a new home at €2,200.

The atmosphere at the auction was great and the buyers were alive as they bid on the quality bulls on offer. Overall average on the day was €2,205 with a clearance of 91%. Breeders were extremely happy with the outcome given that only two bulls failed to reach their reserve and that some prospective customers failed to buy. Buyers were happy with their purchases as they headed for home after deeming it a successful day overall.

The society has further Spring Sales coming up with the next one in Carrick-on-Shannon on the 12th of April. There is a big entry for Nenagh on Saturday April 19th. For more information about any of our upcoming sales please call our office on 044 93 48855 or email irishhereford@gmail.com. 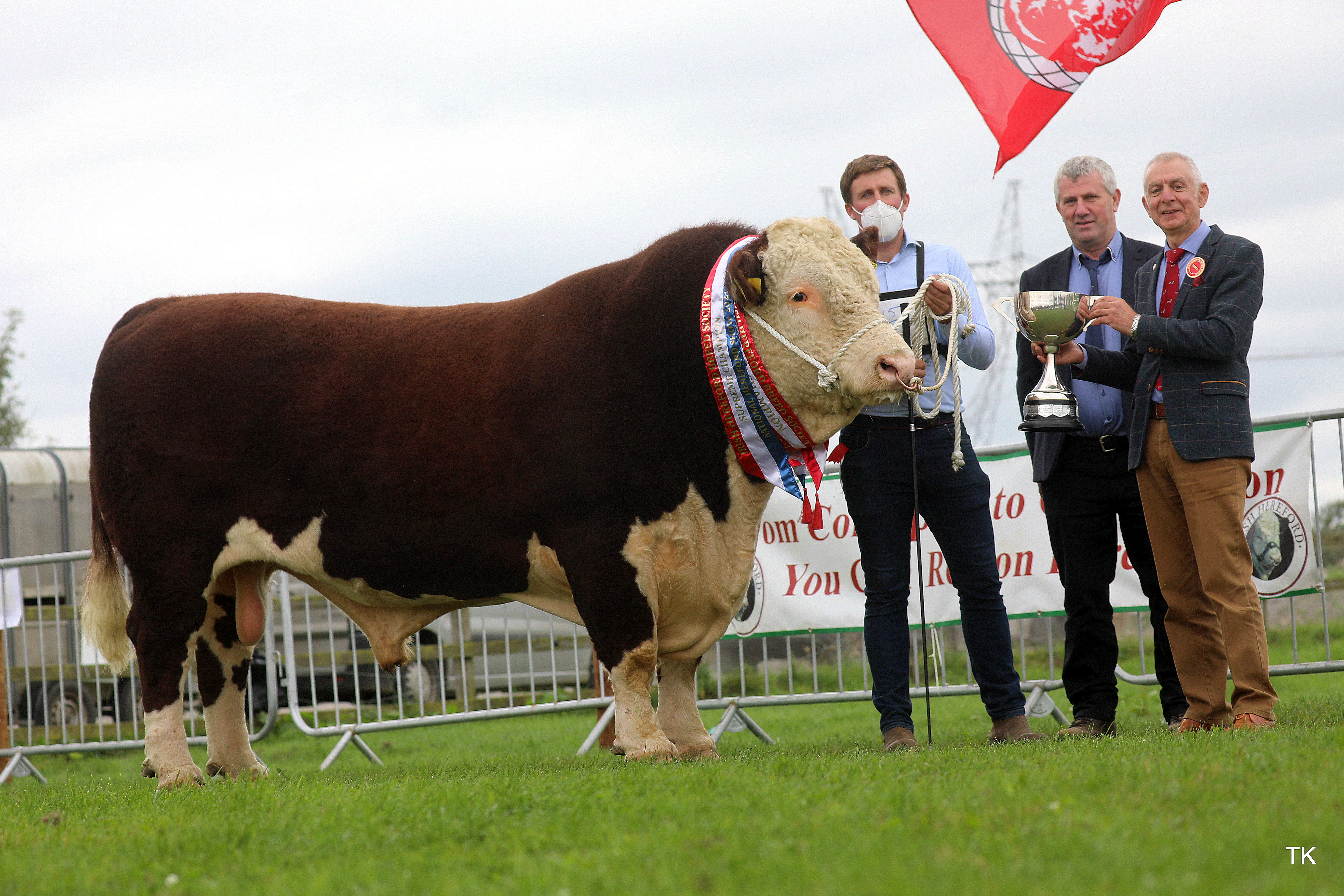