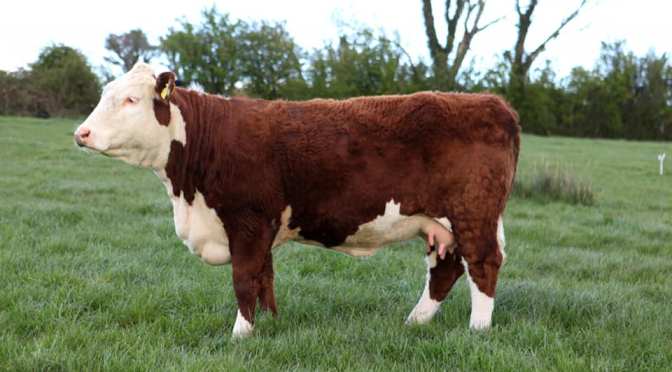 The sale was a great success with the top price of the day flying in at €4300 for a three-year-old Gurteragh Oakley 652 daughter; Dominarigle 1 Laila 779 ET. This smashing cow was bred from one of the best cows in the herd; Dominarigle 1 Sydney 611 which was a Corlismorepoll 1 Sydney daughter. This Four Star Replacement Index cow is also in calf to Gurteragh Rambo and due in October.

Maiden heifer; Dominarigle 1 Rosalyn 881 ET was sold for the second top price of the day at €3300. Born in December 2019, this Four Star replacement heifer is a half sister to Dominarigle 1 Laila 779 ET who sold for €4300 and sired by Gurteragh Justice ET.

It was a horned heifer who topped the price for In-calf heifers when Gurteragh Marigold 816 was sold to Clare for €2800. This stylish heifer was sired by Gurteragh Rambo 700 ET and bred from an F.H Noel Dam. Marigold has a Four Star Replacement rate as well as being in calf to Balleen Bonus and due this month.

Gurteragh Alexandra 693 ET was purchased by a Tipperary farmer for €2700. This five-year-old cow is a Moyclare Lieutenant daughter, due to calve in August and carrying to Gurteragh Oakley. This cow’s dam; Gurteragh Fantasy is also the dam of Gurteragh Aristocrat, who sold for €3700 at the Premier Spring Hereford Sale in Tullamore in March 2019 to a breeder in Northern Ireland.

Dominarigle 1 Trinity 702, in calf to Gurteragh Rambo and due in August, was sold on the day for €2550. Sired by Balleen Bonus, this super cow is a daughter of one of the best cows in the herd; Dominarigle 1 Sydney and her grand dam; Corlismore 1 Sydney was the top priced cow at the Gurteragh & Dominarigle Herd Sale back in 2015.

Top price on the day for weanling heifers was €2050 for a polled heifer; Dominarigle 1 Lyra 925. Lyra was purchased by a Hereford breeder from Cork. Lyra is a daughter of Dominarigle 1 Trinity 702, who sold for €2550 and sired by Gurteragh Rambo 700 Et. With a Five Star Replacement Rate, Lyra was bred from a Dominarigle 1 Sydney dam.

The Society would like to take this opportunity to congratulate Michael on the running of a very successful sale and wish him all the best going forward. Well done and the very best of luck also to all purchasers.