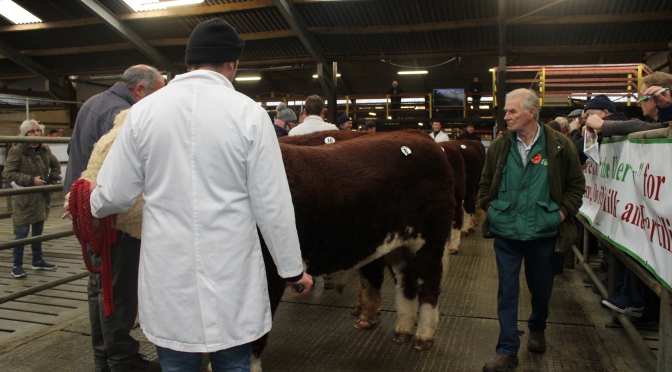 The final Autumn Show & Sale took place in GVM Kilmallock last Friday 25th October. A number of double entered bulls which were sold the previous week in Tullamore along with a number of private sales led to a total of 30 bulls appearing on the day out of the cataloged 46. Of the 30 exhibited, 10 were sold leading to a clearance rate of 33.3% and a combined average price of €2,325 which was reflective of the tough year experienced by farmers. The recent poor weather conditions has left breeders considering purchasing a bull for their herd in the Spring time and thus reducing on-farm pressure for the Winter.

Despite the tough sale, quality was not compromised and one sire came out on top as producing successful stock; ‘Gageboro Morgan’ who sired the Champion, Reserve Champion & 1st and 2nd top priced bulls.

It was a successful sale for Butlerstown Hereford Herd with the judge, Coote Geelan, crowning ‘Butlerstown Ollie’ as Male Champion. This was a step up for the young breeder after winning Reserve Champion with ‘Butlerstown Breezer’ in the Autumn Kilmallock sale in 2018. This fine bull also delivered super results in the sales ring when he topped the sale by making a respectable €3300. ‘Butlerstown Ollie’ is bred from animals from 2 very prominent herds in the country; ‘Gageboro Morgan’ and ‘Kilsunny Lass Millie’, who also bred 1st prize winner bull at Ballygarvan Agricultural Show 2019: ‘Butlerstown Radar’.

Friday was another successful day for David Larkin of ‘Cill Cormaic Herefords’, after selling 2 fine bulls in Tullamore the week previous; ‘Cill Cormaic Quartz’ sold for €3000. This long bull was also bred from the famous ‘Gageboro Morgan’ and hombred by ‘CillCormaic Nadine’. He is a full sister to ‘Cill Cormaic Marvel’ who is in Dovea Genetics along with being a heifers calf, very easy calving & has heifers served.

Reserve Champion on the day was awarded to ‘Tooma Joshua’ who once again was sired by ‘Gageboro Morgan’ and homebred by ‘Tooma Taylor’. This fertility tested & quality bull was sold for €2500.

Many thanks to Irish Hereford Prime who kindly sponsored €200 to each buyer of the 5 highest priced bulls in both of the Autumn sales in GVM Tullamore on Saturday 19th October and GVM Kilmallock on Friday 25th October, this is a huge support & encouragement to breeders both buying & selling.

Well done & the very best of luck to all breeders who exhibited, bought & sold.