The annual Pedigree Bull Show & Sale took place in Bandon Mart on Wednesday 3rd April. There was a total of twenty-one bulls present on the day ranging in age from 16 months to 2 years. However from the beginning of the sale it was evident that trade was going to be tough with only 5 bulls reaching their reserve in the sales ring.

Champion on the day went to Bantry based breeder Gene Lynch for his 18 month old bull “Droumdaniel Richie” whom is sired by “Allowdale Exceller”. Reserve Champion was awarded to Tim Breen, Kiskeam for his bull “Coisceim Kyro” who is a son of Kilsunny Goliath and which sold for €2200. Top price on the day also went to Tim Breen with his bull “Coisceim Jasper” selling for €2800. 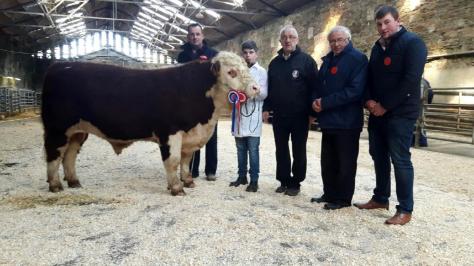 Sincere thanks to IHBS President Martin Murphy and his grandson Shane who were judges on the day, Auctioneer George Chandler, and last but not least to all the staff who organised and held the event in Bandon Mart.