The Irish Hereford Society held the last of its Spring Sales in Nenagh on Saturday 19th of May. A buoyant sale was enjoyed with a strong demand for young bulls in particular. Judging the event was father and son duo Eugene & Eoin Lynch from the Droumdaniel herd in Bantry, Co. Cork. The pair are familiar faces in the show ring having judged the Premier Autumn Sale last October.

It was unfortunate that the sale clashed with the Royal Wedding, however we managed to have some blue-blood at the event, in the form of a king. This was “Castleday King” owned by Michael Farrell, who went on to top the sale on the day securing €3,700. This double 4 star 18 month old bull is sired by Dovea’s top selling AI sire for 2017 ‘Cill Cormaic Kasper’. A smashing bull for his age, “Castledaly King” will now join the Ballyaville herd, a well recognized herd-name in the world of Hereford’s which is owned by the Deverell’s. 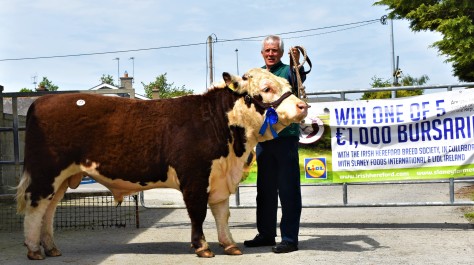 Following close behind was Rory Farrell’s “Ballinveney Tiger” making a total of €3,600 which was paid by Phil Smyth from the Ardmulchan herd in Navan, Co. Meath. This fine 13 month old bull contains bloodlines from ‘Yarram Star General’ and Bowmont Storm’ which are largely responsible for giving “Tiger” a more traditional Hereford appearance, something that Rory Farrell would be well recognised for. 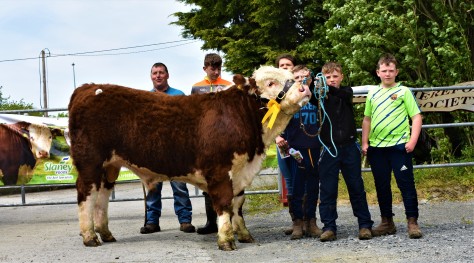 Padraig McGrath’s 13 month old “Kye Hotspur 783” sold for €3,400 to the well decorated herd of Kilsunny. Having 5 stars for both indexes and a impressive calving difficulty of 2.8% this attractive looking young bull is sired by the well known Free Town Hotspur and will hopefully serve Trevor Dudley well. 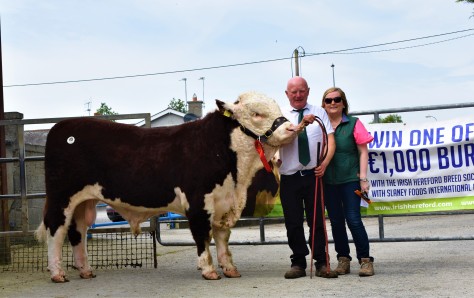 Padraig & Catherine McGrath with “Kye Hotspur 783”, sold for €3,400 to Trevor Dudley of the Kilsunny Herd

Having been entered for the first Nenagh sale but unable to make the event due to a sore foot “Cave Hill Pogba” recovered well to make the second of our Nenagh sales, securing a price of €2,950. An exceptionally well bred bull of great breed character and out of one Padraig’s super cow families ‘Cave Hill Adorable’. Giving the inclement weather conditions at the start of the year, many farmers were finding it difficult to part with money as cash flow was tight. As a results many breeders felt they weren’t being dealt a fair price when it came to selling bulls. It’s clear that Padraig made the right choice in holding of to sell ‘Pogba’ until  conditions improved which resulted in him achieving a price of €700 extra on previous offers. 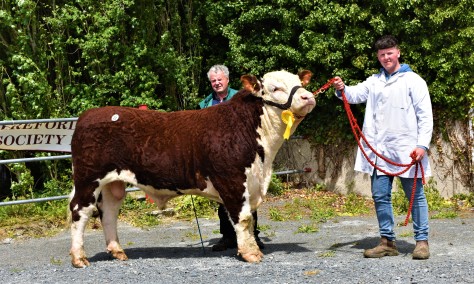 Another bull by Trillick Hotspur was Padraig & Patrick Farrell’s “Cave Hill Pogba” which made  €2,950

Champion in the pre-showing event went to “Cill Cormaic Padraig Pearse” bred by David Larkin who bid his way up to a price of €2,800. This 16 month old bull is sired by David’s stock bull ‘Cill Cormaic Lincoln’ which has done well for the Cill Cormaic herd in recent years. 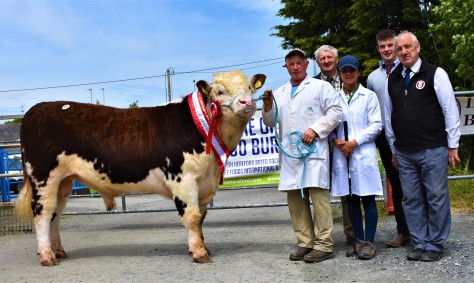 Nigel Heatrick’s Glaslough Rascal was the second of three bulls to hit the €2,800 mark on the day. A powerfully built bull that will be going straight to work, entering a herd of over a 100 cows it’s clear that new owner Pat Heffernan was looking for a sire with length, strength and all round conformation. 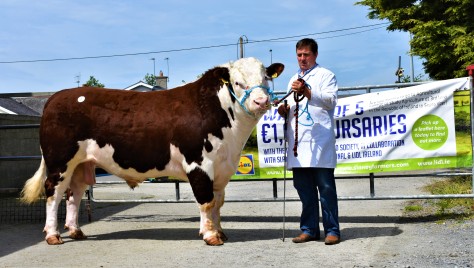 The third bull to hit the €2,800 mark was Tom & Anselm’s Fitzgerald’s “Grainan Ricky 2” who sold to Nicholas Cronin from Co. Cork. This 14 month old bull scored full marks on both indexes and also has heifers served. 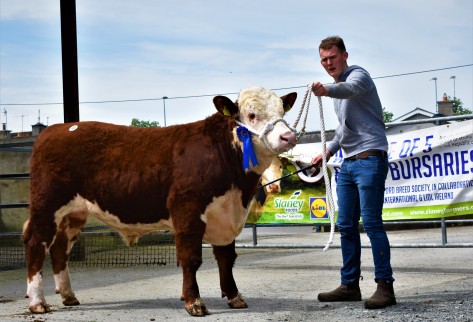 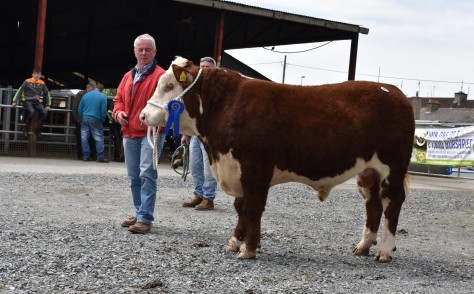 Liam Deely from Charleville, Co. Cork purchased “Ardlahan Reg” from Darren O’Rourke Kildimo Co. Limerick. This 18 month old bull is sired by Trillick Hotspur who is  known for producing animals that go on to perform well within the show circuit and sales ring. 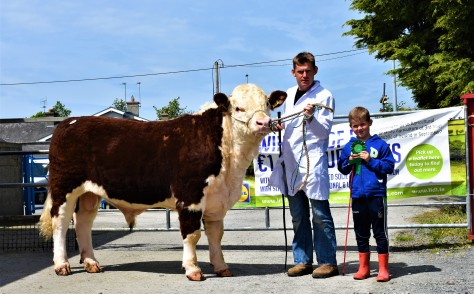 Darren & Conor O’Rourke after selling their bull “Ardlahan Reg” for €2,600

Reserve Champion went to “Ballyraggan Raldep 865th” bred by James Thompson from Co. Carlow. Born in August 2016 this 21 month old bull is sired by their stock Ballinveney Pedlar, who has done exceptionally well for the Ballyragan herd since he was purchased at a Nenagh sale a few years back from Rory Farrell. 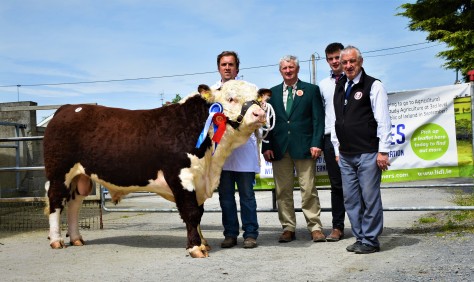 The sale produced a clearance rate of 72% with bulls selling to an average price of  €2550, which is slightly less than last year’s sale average however this can be largely attributed to  the challenging weather conditions farmers faced at the start of the year. Overall, the demand for Hereford was good and the results from this sale combined with the prices achieved at the final Kilkenny sale is a breath of fresh air.

We look forward to the start of the shows over the coming few months which I’m sure will no doubt display much competition among breeders and hopefully yet again allow the Hereford breed to establish itself as one of the main breeds at these exhibition events throughout the country. 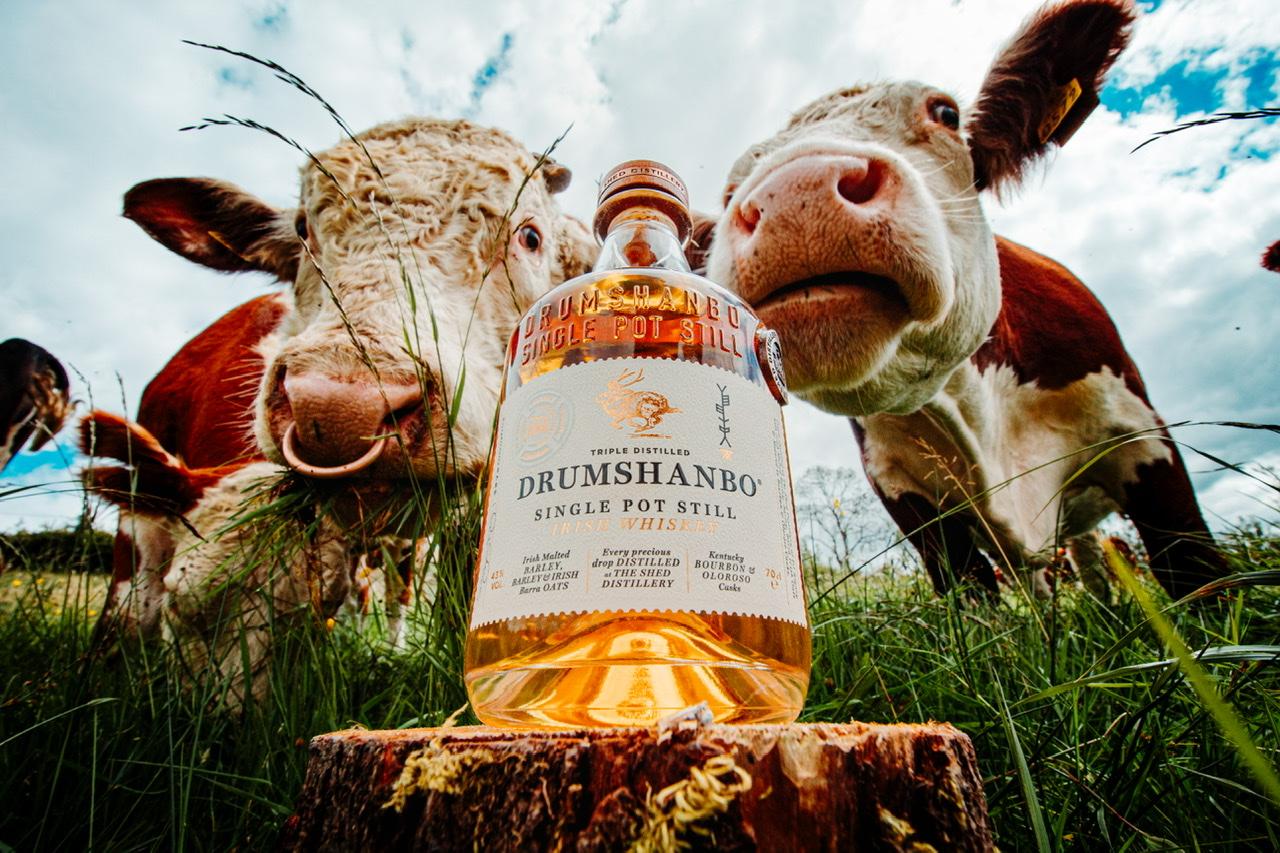 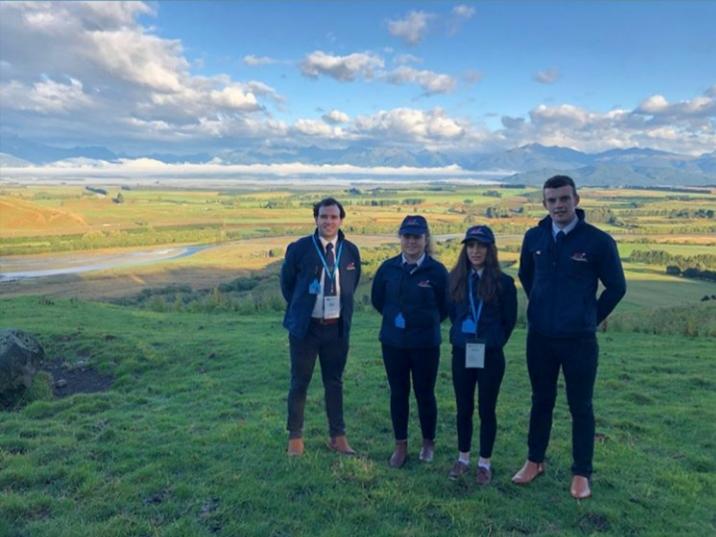