The weather seems to be all that’s talked about at the minute, given the long winter we experienced at the start of the year leaving farmers facing an uphill battle with fodder shortage and poor ground conditions, which  impeded earlier Spring sales.

With animals now making their way out to pastures and ground conditions looking to improve the only thing to worry about is having cows in calf for next February, which means a bull would have to be purchased. We got the sunshine we were promised last week which saw a much improved demand for bulls with 60% clearance coupled with a price range of of €2,200-3,050 equating to a very respectable average of €2,500.

There was much more energy around the sales ring in comparison to previous sales as customers seemed more willing to secure a bull on this occasion. The bulls that sold well had one thing in common, they all had mix of the Australian bull Churchill Storm in their pedigree, a bull which was introduced to Irish breeders through the Breed Improvement Scheme over 12 years ago.

Top price went to Clondrina 1186th owned by Gerard & Declan Donnelly who accepted €3,050 for their champion of the event. This powerful bull has been out on grass for the past month and is very keen to get out and bull cows. On paper Donnelly’s champion performed very well scoring 5 & 4 stars for terminal and replacement indexes along with a figure of 3.4% for calving difficulty. Sired by their stock bull Balleen Gilbert who has worked very well for the Clondrina herd producing quality Herefords that have always done well for the Donnelly’s at numerous shows & sales.  This 21 month old bull showed great breed character ticking all the boxes you would expect to see in a traditional Hereford bull along with attractive pedigree lines with sires Gageboro Eugenic and Churchill Storm running through his bloodlines.

Rory Farrell’s Ballinveney Talent was second best on the day as he sold for €3,000 to Ger Mitchell from Grange, Co. Limerick.  Having been awarded Reserve Champion at Nenagh the previous week but failing to meet his reserve Rory made the right choice in holding off until the following Friday as Kilmallock seemed to offer a larger selection of customers. This fertility tested bull who was out-wintered is sired by Gageboro Morgan, similar to the champion this bull offered the attractive bloodlines of Gageboro Eugenic and Chruchill Storm. 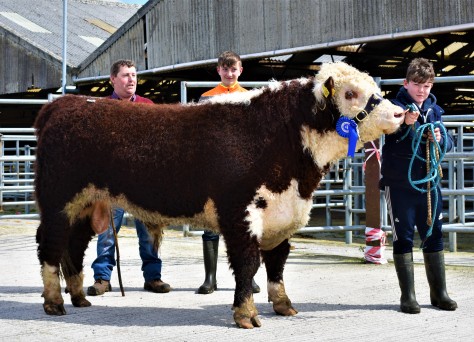 Trillick Jasper owned by JJ Farrell sold for €2,800 to Kathleen Stokes, Tullylease, Co. Cork. Jasper has great length and shape to him at just 16 months old who is sired by the well known Steil Gerard a bull who also has Churhill Storm within his pedigree status. JJ’s second bull Trillick Bruce is sired by the old reliable Free Town Hotspur. Bruce went for a similar price with Walter Shorten, from Askeaton, Co. Limerick becoming the new owner for a price of €2,750.

JJ Farrell with Trillick Jasper that sold for €2,800.

It is hoped that this positive trend of buying bulls continues for the last of our sales scheduled for Saturday 19th May in Nenagh.