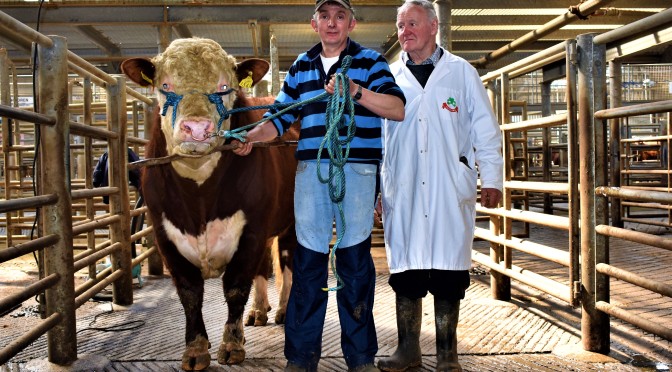 The second episode of Kilkenny’s annual multi-breed sales (three in total) took place on Wednesday 18th of April with a total of 25 Hereford bulls registered for the event, however there were only 20 present on the day. The sale was much livelier this time around with weather conditions finally looking to improve, putting the worries of fodder shortage along with additional cost of housing animals out of farmers minds as many were optimistic in getting cattle out to grass within the next few days.

Breeders from far and near were in action in the pre-sale showing event with a total of two classes entering the ring. Glenn Jacob from the Dunsinane herd in Enniscorthy, Co. Wexford took the championship with his first prize winner “Dunsinane Brave ET”.  Sired by Bowmont Storm this smashing bull showed beautiful length and thickness at just 20 months of age.

Next in the spotlight was Tom Brennan’s winner of the following class “Balleen Olympus” who went on to take the rosette for Reserve Champion. A son of Gageboro Eugenic this fertility tested bull was powerfully built, ticking all the boxes for height, width and  depth along with 4 and 5 stars for terminal and replacement indexes.

Moving on to the auction now with Tom Brennan’s bull “Balleen Rioja” who was one of the first lots to enter the sales ring. “Rioja”quickly climbed his way up the ladder to a sum of €3,000 which was to be the ceiling price for the day. Similar to Tom’s Reserve Champion, Rioja was a herculean bull of large frame who was very strong on his feet.

Christy Finn entered the ring next with “Bawngarriff Hawk” led by nephew Brian Walsh. The duo joined Brennan at the top of the ladder when they managed to secure €3,000 for their attractive looking bull. Sired by Chatsworth Hector this bull performed well on paper as well as in the sale ring scoring  3.6% for calving difficulty along with exhibiting all the qualities you would expect to see in a traditional Hereford bull of superior quality making him a good purchase for a dairy or pedigree herd. 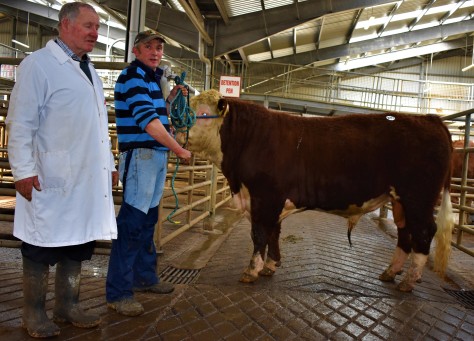 Trevor Parr secured €2,800 for his 19 month old bull “Tourtane Harry”. This fertility tested bull  is a son of Cave Hill Storm, a sire who has fathered numerous calves that prospered within the Pedigree Hereford show and sales circuit, while also achieving a great deal of success himself when he won Supreme Hereford Champion at the Nation Hereford Show Tullamore back in 2014. “Harry” was a bull with excellent conformation in the shoulders and hindquarters who displayed a deep red coat that many breeders look for when purchasing a bull for their pedigree herd. 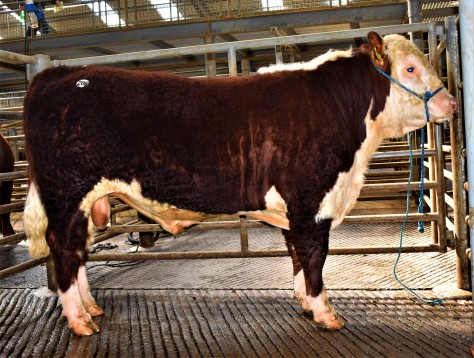 Trevor Parr’s Tourtane Harry which made €2,800 at Cillin Hill Mart 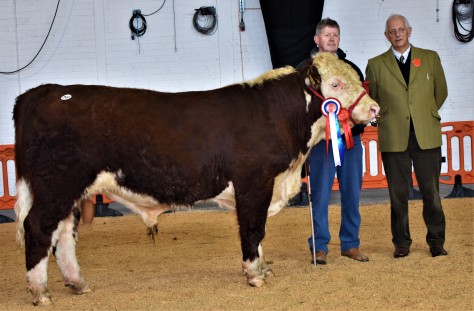