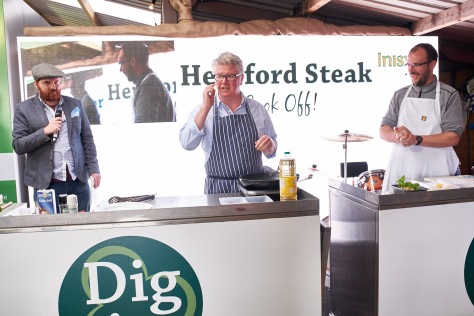 The Hereford fillet is just one of the wide range of Certified Hereford beef cuts available at all of Lidl’s 142 outlets nationwide. Demand for the range continues to grow rapidly as more and more satisfied customers extol the quality of the product which is matured for a total of 28 days ensuring tenderness together with a delicious taste and eating experience that lingers on the palate long after the last tender morsel has been consumed.

Comedian and compere for the event Bernard O’Shea well known from television particularly the zany ‘Republic of Telly’ and ‘The Panel’ was on hand to introduce the well- known TV personalities and Lidl ambassadors Paul Flynn and Ian Orr, to introduce the products, but also to talk with representatives of Slaney Foods, Linden Foods and the Irish Hereford Society on production and processing and to hear from a Bord Bia representative in relation to its quality assurance scheme. A whole range of Bord Bia Quality Assured produce was on offer to sample.

Both Paul and Hugh are indeed masters of their craft with wide experience and culinary expertise.  Following some excellent cooking tips and suggestions as they cooked the Hereford fillet was sizzling with a mouth watering aroma that can only be associated with the best beef, it was down to the viewing public to discern which had delivered the top steak. Such was the expertise of both that there was agreement from all as to the quality of ‘Inisvale’ Certified Hereford beef.

Marty Moon and the Mad Ass Mules whose U-Tube success ‘Hit the Diff’ has their fans rocking in the aisles were performing on the hour at the Lidl exhibition ensuring a continuous stream of visitors who also had the opportunity to view Ireland’s top chefs as they engaged in the Hereford Fillet beef cook off. Visitors could also test and taste the numerous other quality Irish products on display, speak directly to Irish producer suppliers to Lidl or climb the Lidl viewing tower for a birds eye view of the national ploughing championship site. 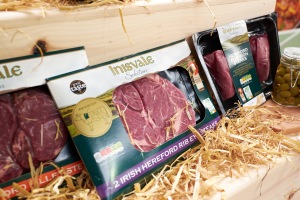