The Hereford breed had a fantastic turn out at the Kilkenny Bull Show and Sale yesterday , with a number of high quality bulls on offer. The show commenced at 10:30am with Mr. Michael Molloy judging what can only be described as a tough competition. After much deliberation the anticipated result was announced with local well known breeder and show committee member Mr. Christy Finn placed 1stand later Champion with his Bull Bawngarriff Miracle. This is a five star bull with a calving index well below average. Sired by Mr Finn’s stock bull Ballydowel Glynn and out of a homebred dam Bawngarriff Anne he sold for €3,450 putting him in top position in both the show and sale. Mr Finn also exhibited Bawngarriff Performer by the same sire with similar indexes out of the homebred Bawngarriff Deluxe. He sold at a very satisfactory €3,200 to average €3,325 for his day.

The Reserve Championship was awarded to Mr, Sean McKiernan with his Bull Corlismorepoll 1 Nation 699. Again a five star bull by Grianan Firecracker out of Corlismorepoll I Sydney he failed to reach his reserve on the day.

Local man Joe Maher Ballydowel, Rathmoyle who bred the sire of Mr Finn’s bulls exhibited Ballydowel Jack. Sired by stock bull Balleen Frost which has bred very well for him to date and out of BallydowelDinna he sold at €3,250.

Tom Brennan, Balleen, Freshford a regular exhibitor at this event and never far from the top honours exhibited Balleen Everest a five star bull on all traits sired by his very successful stock bull Gageboro Eugenic. Out of BalleenPrettymaid 17th he sold at €3,100.

A huge crowd gathered for the auction to see these fine Hereford Bulls on offer. There was an overall average just short of €3,000 with a top price €3,450 for Mr. Christy Finns Champion Bull Bawngarriff Miracle. The sale was deemed a success and given current demand for Hereford suck calves and quality assured steers and heifers spirits were high as everyone headed for home. We would like to congratulate Kilkenny Agricultural Society on hosting a great atmospheric event, with everything being completed in an efficient and punctual manner. 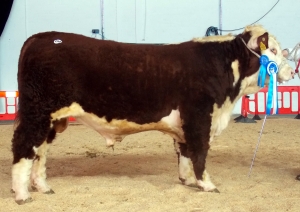